All change in dentistry, whether you’re ready or not

In a small English town all is well. The recession has gone, house prices are on the up and there are plenty of new Audis on the streets.

At Smile A Lot Dental Care the principal arrives at 8:59 for his first patient. The associate is already in, joshing with the girls over an instant coffee and the receptionist is just taking the first cancellation calls for the hygienist.

The principal has owned the practice for 17 years now and the three surgeries, associate and two part-time hygienists help look after roughly 2,500 active patients, a third of whom are on Denplan Care.

The practice turns over a steady £650k on fees of around £200 an hour, making an annual profit of circa £140k, which is gently going down year on year.

There is no marketing to speak of apart from a five-year-old website and a tired banner saying, “New patients welcome”.

Inside the practice it’s all a bit faded; the blue-tacked notices, the smile on the receptionist’s face, the hall carpet. The principal would like to invest in a refurb but hey, the falling profits won’t allow him to…

The practice (along with the four others in town) opens 9-5, apart from a “late” evening on a Tuesday, until 7pm, and closes Friday afternoons.

All is well. However, unknown to our principal, change is stirring amongst his four competitor practices. BUPA is talking to one of them about buying the practice at a premium price and keeping the principal working as an associate on a five-year earn-out.

They will rebrand it, add it to their rapidly expanding network and invest heavily in marketing and sales training for the team.

IDH is part way through buying the local NHS practice as part of its rapid acquisition programme in an attempt to control the NHS market by becoming the Government’s preferred provider of NHS dentistry.

Another local principal, the youngest and most entrepreneurial one, is talking to Sainsbury’s which has a huge store on the nearby out of town retail park, about opening a practice with low fees and seven day opening.

It’s going to be a spoke to feed his existing hub practice which does advanced restorative and implant based treatments. He will base his proposition at Sainsbury’s on affordable general dentistry, adult invisible ortho and tooth whitening.

I’m afraid as the news breaks of these four deals our principal at Smile A Lot is inevitably going to panic and (most likely) preside over a rapidly shrinking practice, his options having mostly run-out.

Please don’t let this happen to you! Right now, you still have plenty of options but sitting on the fence and waiting to see what the others are up to is the most risky one!

I don’t need to be right about this, but since Lehman Brothers fell over I’ve been saying and writing (see my book Moonwalking For Dentists which is on offer this week – see below) that it’s all change in dentistry – the industry is going through irreversible changes and there will be winners and losers.

Well, it’s happening, and happening even faster than I thought it would, and if you fence-sit on this, you will end up joining the losers.

If you would like some help with reviewing your options, please contact me for a chat.  Before it’s too late.

With all good wishes,

This week our blog readers can get 25 per cent off Moonwalking For Dentists, the groundbreaking workbook by Dr Simon Hocken and Jonathan Fine that defines the retail challenge faced by dentists in the 2010s and gives easy steps on how to survive in business.

To get your discount code email jane.chrispin@breathebusiness.co.uk with the subject ‘MFD discount‘.

Reviews of Moonwalking For Dentists 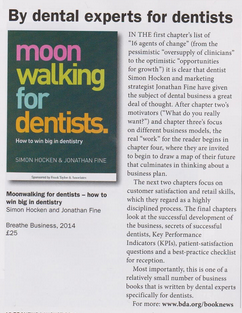