Cecil – a lesson in fear and loathing

Did you see the front page of the Daily Mail last Friday? It splashed on an apparently minor detail in the story about a balding big game hunter who killed a lion in Zimbabwe. Yes, you guessed it – he was a dentist! The inevitable headline: WHY WE ALL FEAR DENTISTS ARE NATURAL BORN KILLERS. 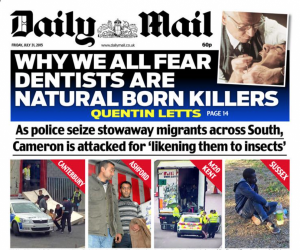 The front page of the Daily Mail on July 31

Perhaps its author, the theatre critic Quentin Letts, jumped on the story because it seemed like a pantomime with the ultimate villain – a rich American dentist called Walter who goes round killing rare animals in the third world. Post-colonial rapaciousness at its worst, surely.

Never mind that the Zimbabwean government licenses hunting as part of its tourist trade (49 hunted lion carcasses were exported as trophies in 2013), Walter had killed the wrong one! His kill was named after the famous British colonialist Cecil Rhodes no less, and not only that – Cecil was being tracked by his namesake’s alma mater, Oxford University.

To make matters worse, Cecil was a hit with unarmed safari tourists because he didn’t mind humans coming close to take pictures. So that’s how Walter got him with a crossbow.

Anyway, in response to all this Quentin Letts dug deep and let rip with, err, a litany of all the times he could think of when “dental villains” have cropped up in history and popular culture. He talked about gold teeth being removed at Auschwitz, obscure 70s films and – this one’s really good – the fact that dentists wear masks “just as highwaymen once did” to prove that dentists do indeed make “natural villains”.

Perhaps Letts was under pressure from maniacal Mail editor Paul Dacre (known as “the Robert Mugabe of Fleet Street”) to come up with some quick copy. Dacre, the most longstanding and unbridled editor in the business, probably ordered up the piece and put it on the front page because he knows people are still extremely scared of dentists and, in his paper, there is no better complement to outrage than fear (see how he made sure it was in the header?).

To be fair, the fear around dentistry is real, but Letts goes too far when he says people around the world have a “hypnotised fascination with – and horror of – dentists”. They don’t, they simply don’t realise modern dentistry is painless, which is why visiting the dentist is still ranked number one for making people nervous.

There’s much to do to get the message out, even without lion killers and mad columns in the Mail.