How to get thousands of video views

Less than a week ago, a client of mine in Belfast posted a 16 second video on Facebook of a patient receiving lip fillers. There was no sound and the picture was a bit jerky, shot as it was on a mobile phone, so we were ecstatic when the clip got 13k views within a few hours. It’s now at 19k views and 302 comments and counting.

The principal at Martina Collins Dental & Skin Clinic won’t mind me telling you that her diary was quickly booked up, and we expect there’ll be some longer term benefits from the raised awareness of the brand in her catchment area. But not that long term – the trick with this kind of content is little and often.

However, anything is better than what 90 per cent of practices are doing, which is nothing. If you take a look at a random sample of dental practices on Facebook, you’ll see that video content is still remarkably thin on the ground. I just looked at 10 in a row with no video content or, for that matter, much else. If I looked at another 50 I wouldn’t expect much difference. 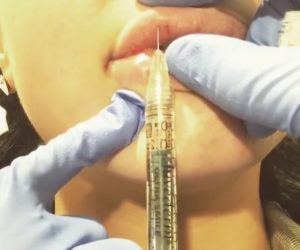 I believe there is massive patient acquisition machine here that’s not being used, and it’s in video on Facebook. Videos now account for 57 per cent of all consumer traffic online and in the next two years that’s going to be rising to 79 per cent. And while 300 hours of content are being uploaded to YouTube every 60 seconds, your potential patients are generally only seeing what they look for on YouTube.

Facebook is a different beast, where your video content comes to potential patients when they are in the right frame of mind to receive it – the pre-digital advertising world could only dream of this type of situation for a selling message to be delivered to a prospect. If they have shown an interest in your Facebook page or in anything associated with your business before, your video will pop into their feed. If any of their friends like or share your video, or comment on it, they will see it too. This is what we mean by viral; at the beginning of the week Martina rang to tell me she had had 4k hits, four days later it was 19k!

The slow uptake of video by dentists is not limited to Facebook – many practices still don’t have patient testimonial videos on their website, and if you don’t your site’s performance is hobbled and the cost effectiveness of your search marketing is limited. But away from your site Facebook is particularly good for dentists because the platform is a walled garden for video sharing, which means users stay on your page once they’ve watched your content and are more likely to end up making an enquiry. Facebook has announced staggering view counts that trump YouTube, so more people are watching, and it’s app is also doing extraordinarily well on smartphones, which are now used twice as much as laptops and PCs for browsing.

So, don’t be shy, start shooting and posting! And if you need help or advice please get in touch, I’d be happy to help.